Yo Gabba Gabba Had a Party in my City...

Posted by Kristin on September 27, 2010
I know I told you all how excited I was about going to see Yo Gabba Gabba Live with A&W so of course I could not wait to tell you all about it after the show!
Early on in the week we told the boys that we were taking them on a date but would not tell them where we were going.  They had some guesses...apple picking, McDonald's, Olive Garden were just a few but they never did guess what we were really doing.  On the night of the show we left Baby R with Nana so Mommy and Daddy could have date night with their boys.  When we arrived at the Merrill Auditorium there were posters of Yo Gabba Gabba in the lobby and souvenirs featuring the characters but it took a minute or two for it all to sink in.  The boys then realized we were seeing Yo Gabba Gabba but at that point they thought we were there to watch the usual show on the big screen which still had them super excited!  While in the lobby we were approached by one of the Yo Gabba Gabba team who asked if we would like to attend the special after party with the Yo Gabba Gabba crew....YES!!  We got special bracelets to attend the party which only added to the excitement.  I couldn't believe our good luck!
Once inside we found our seats which were awesome and waited for the show to begin.   The kids were even given DJ Lance Glasses to wear.  When the lights dimmed and the music came on the looks on the boys faces were just of amazement.  When DJ Lance came walking onto the stage it just about blew their minds.  He was REAL and he was HERE!   Priceless.  The show was so fun and energetic and, quite frankly, might have been my favorite concert ever (sorry U2 and Billy Joel).  DJ Lance &Co. had the kids up dancing to favorite songs (Don't Be Afraid, Party in my Tummy), Biz did some beat box, at one point hundreds of balloons fell from the ceiling, not to mention confetti and bubbles.  It was amazing.  The kids had a blast and so did my husband and I.  From the looks of it every kid there was having the time of his or her life and the parents were way into it too! 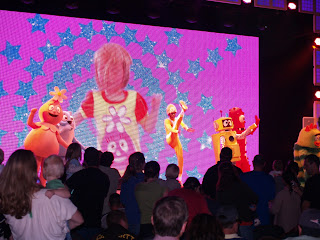 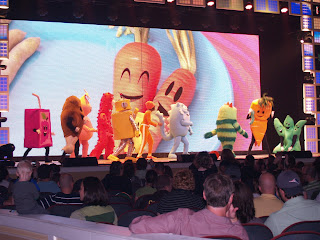 ﻿
When the show ended we got to go to the after party for more fun.  What an experience.  We were there with about 40 others and there was Yo Gabba Gabba decorations, drinks, munchies and the entire cast!!  The boys were so cute and and were especially excited to meet DJ Lance who was so nice.  Alex and Will were impressed that he could lift them both up and were beyond tickled that he gave them an autographed picture. I will be honest, my husband and I were pretty excited to have pictures taken too and have pretty much sent copies to everyone we know!  After some photos and meeting the gang we listened to Biz do some beat box with the kids...so funny!  The four of us headed home happy with an amazing date night.  I knew the kids would have a great time but I had no idea how excited they would be.  I was so grateful that the boys (and me and my husband!) got this experience.   A&W are still completely in awe that they got to meet their favorite characters and that they are "real".  You really don't want to miss this show if you can help it!  You can find a party near you here.  If you don't have a child of your own bring a friend's because this show is that fun!! 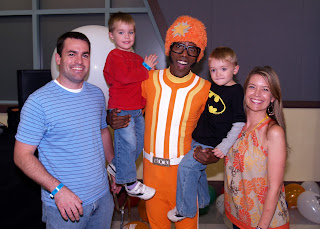 Monique said…
I'm glad you had fun! We can't waiti for them to come to SC.
Monique

AirForceWife and Mommy of Two said…
Stopping by to say hi! Awesome blog and my girls love Yo Gabba Gabba. I am your newest follower thanks to Making Friends Monday. Can you please follow me back?

im a new follower!! would love a follow back

Anonymous said…
This was truly an amazing show. We attended the Buffalo show at the beginning of the month, definitely a must see show for ANY Gabba fans! Full of fun, love the photo of all of you together, how exciting!
September 27, 2010 at 5:43 AM

Mom vs. the boys said…
oh that looks like so much fun, kind of sorry we missed our showing now. glad to hear mom and dad liked it to, the hubster and I thought it would be torture to sit through! great review!
September 27, 2010 at 8:19 AM

Diane said…
You guys look so happy! That is awesome that you got to go to the after party and meet the cast! The kids are going to remember it forever!
November 17, 2010 at 5:04 PM 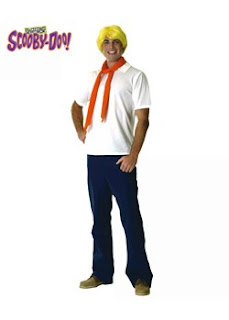