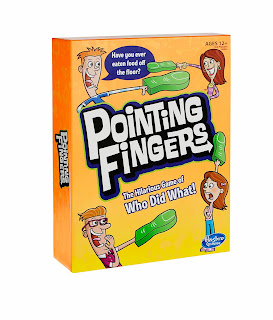 As you all  know, I love games.  I have ever since I was a kid and now love playing games with my children and with my grownup friends and family.  I think games are an outstanding way to connect and unwind.

I recently had the opportunity to review the new game from Hasbro,  Pointing Fingers and it is so much fun.  Have you heard of it?  Here is the scoop.... 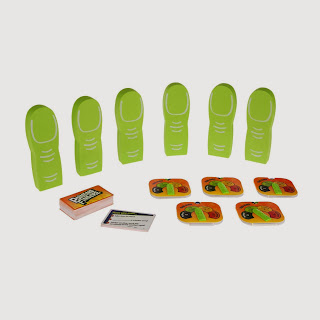 The Pointing Fingers game is the hilarious game of who did what. Friends and family will have a laugh-out-loud time as they wear oversized foam fingers and literally point out outrageous things about each other! Who in your group of friends is most likely to sleepwalk? Or eat off the floor? Point out the person who you think is the most likely to do so and earn points for being right! You’ll be amazed at the funny things you’ll learn about your friends and family!

What a fun game!  First of all, can I just say that the foam fingers are hilarious??  The fingers made the game a hit before it even was played.  The basic concept of the game is to read a question from one of the one hundred cards (be prepared for LOTS of silly and fun questions!!!) and then decide how often  you have done this silly or outrageous thing by using the meter (keep this to yourself).  Next players point the silly fingers at the person they think has done this the most.  Hilarity pretty much ensues each time!  We played this with a group of grownup friends and we all had a ball...we laughed and laughed.  Additionally, I played this with my children who are 7.  It is suggested for ages 12 and up but by filtering out some questions, my younger children enjoyed as much as the grownups.  I won't tell you how many of us have eaten off the floor!

If you are looking for a fun game that guaranties laughs, Pointing Fingers from Hasbro is the game!  You can find the game at all major stores including Target.


I am so excited to tell you that Hasbro is giving one lucky RBM reader Pointing Fingers!  This is a FLASH GIVEAWAY though so hurry to get those entries in.  Thanks to the sponsor and good luck! a Rafflecopter giveaway

boyzrule said…
We play about once per week.

susansmoaks said…
we play games at lease once a week.

i am tony l smoaks on rafflecopter.

Hifam said…
At least once a week. One of our favorites right now is "Castle Panic". It's nice cause the family has to work together to defeat the monsters. It's helping my kids shift their focus from trying to beat everyone to working together. Forbidden Island is also that way.
January 15, 2014 at 8:46 AM

Unknown said…
We play several times a month. We play more often when we are on vacation or have company.
January 15, 2014 at 9:50 AM

AdventuresofanActivityDirector said…
Probably not as often as we should. We really enjoy playing board games!
January 15, 2014 at 11:21 AM

Danielle Porter said…
Whenever our family all gets together so once or twice a month!
January 15, 2014 at 12:22 PM

samdaleo said…
We don't play them often enough but I absolutely love when things slow down and someone thinks of it. It's so much fun!

Ann Fantom said…
We play board games every couple of weeks.

Gina F. said…
We play board games at least once a week on either Fridays or a Saturdays with lots of snacks too.
January 15, 2014 at 4:50 PM

Puddles and Poop said…
We've just started to venture into board games since my boys are 3 years and 21 months. We probably play a couple times a month.

Peggy Rydzewski said…
We try to get together once a month for pot luck dinner and game night.
January 15, 2014 at 6:12 PM

thatmommygirl said…
We use to have a set game night every week but that has kind of faded into once a month. I would like to get back to once a week.
January 15, 2014 at 9:18 PM

Kayla Hyde said…
We don't have family game nights as my son is still too little but I can't wait to do them in the future!

Unknown said…
We try to do either a family game night or a family movie night every weekend - doesn't always work out now that the two oldest kids are teenagers with their own lives, but we try!
January 16, 2014 at 4:44 AM

Unknown said…
We try to have family game night every Friday or Saturday night. We have it more often in the summer.
January 16, 2014 at 5:21 AM

Melissa said…
We play board games a lot, monopoly is a good one because it works so much on math and reading skills.
January 16, 2014 at 6:39 AM

Unknown said…
My husband and I play board games frequently! We love Monopoly, Life, Guess Who? Apples to Apples, Sequence, etc. Our son is almost 17 months old so he will be getting into board games soon!
January 16, 2014 at 8:16 AM

harolde said…
We play every weekend. That's when the grandkids come over.

Vikki Billings said…
We all get together twice a month at my moms house and play games!
vikki.billings@yahoo.com
January 16, 2014 at 6:42 PM

I am so excited to report that Disney on Ice will be coming to Portland in February!!  I simply can't wait to take my three children to the show.  They love all the Disney characters and I know seeing the show on ice will be a magical experience for them (and me!!).  Here are all the details.... Rev up for non-stop fun with four of your favorite Disney stories when Disney On Ice presents Worlds of Fantasy comes to your hometown! This action-packed ice spectacular showcases beloved characters from Disney•Pixar’s Cars and Toy Story 3 and Disney’s Tinker Bell and The Little Mermaid. Produced by Feld Entertainment, Disney On Ice presents Worlds of Fantasy is performing at Cumberland County Civic Center, February 6-10, 2013. Tickets go on sale at Ticketmaster.com, local Ticketmaster outlets and the Cumberland County Civic Center box office on Monday, December 10, 2012. Thrill to high-speed stunts as Lightning McQueen, Mater and the crew of Disney•Pixar's Cars r

Just in time for the holidays there is a fun new DVD on the shelves featuring a well-known cat with attitude.....Garfield!  Happy Holidays Garfield is out now and would make a great addition to your DVD library.  Here is the scoop... Kids and parents can join Garfield, the quick-witted orange tabby that loves lasagna, coffee, and his remote control, this holiday season as he celebrates Thanksgiving and Christmas in “HAPPY HOLIDAYS GARFIELD.” This special will also be available for digital download. The DVD features these two fun-filled holiday episodes: “Garfield’s Thanksgiving” Jon Arbuckle invites veterinarian Liz to celebrate Thanksgiving with him, Garfield, and Odie! But Jon has no clue how to prepare a Thanksgiving meal and even worse—Liz declares that Garfield must be put on a diet… on the day before Thanksgiving! Will anyone come to the rescue and cook a delicious dinner for Jon and Liz? “A Garfield Christmas Special” Garfield gives Grandma love notes he found that wer 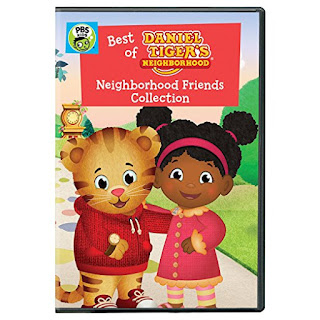 One of my most favorite shows on PBS for kids is Daniel Tiger.  I love how the Daniel Tiger character from Mister Roger's has been given new life in this charming show.  There is a brand new DVD out featuring a great collection of Daniel Tiger favorites....Best of Daniel Tiger's Neighborhood:  Neighborhood Friends Collection is out now and is a guaranteed hit with pre-schoolers.  Here is the scoop... DANIEL TIGER’S NEIGHBORHOOD fans in neighborhoods from coast-to-coast will learn all about friendship and helping one another when PBS Distribution releases “Best of  DANIEL TIGER’S NEIGHBORHOOD: NEIGHBORHOOD FRIENDS COLLECTION ,” the newest DVD featuring eight engaging stories from the hit PBS KIDS series, produced by The Fred Rogers Company. In the engaging new DVD, Daniel Tiger and his friends teach children all about cooperating, playing together, and helping out neighbors in the fun-filled stories. Young viewers can join Daniel as he uses his imagination to play “outer